The historic mansion and gardens at the George Eastman Museum provide a glimpse into the life of one of the greatest American innovators and entertainers in the first decades of the twentieth century. Original furnishings and artifacts, careful reproductions, and beautifully restored landscape transport visitors to George Eastman’s time.

Over the decades, the museum has restored and preserved the mansion and gardens, with the support of various fundraising projects. The care and preservation of this historic estate is a significant ongoing effort.

The Colonial Revival mansion, built between 1902 and 1905, served as George Eastman’s primary residence until his death in 1932. Today, visitors can explore the historic mansion on their own or on a guided tour, offered daily. Live music performances are offered in the mansion most Sunday afternoons throughout the year.

On the main floor, visitors enter from the museum through the Palm House and Colonnade, which also provides access to the Schuyler C. Townson Terrace Garden. Past the Colonnade, visitors enter the Dining Room and continue into the Conservatory, the center of the mansion. The Billiard Room, Library, Great Hall, and Living Room are all accessible from this large two-story room. Up the Grand Staircase on the second floor, visitors will see the restored bedroom suite of Maria Kilbourn Eastman (George Eastman’s mother), the north and south organ chambers behind latticework, the Sitting Room, exhibitions related to George Eastman and Eastman Kodak Company, and the Discovery Room, with hands-on image-making activities for kids.

The third floor, now used for museum offices, once housed Eastman’s screening room and workshop, as well as living quarters for household staff. Museum members can go behind the scenes to the third floor and the basement on the monthly Upstairs/Downstairs tours.

Read more about the history of the mansion

In his time, George Eastman’s urban estate functioned as both a working farm and an elegant floral setting for entertaining. Today, the gardens welcome visitors from May through September for daily guided tours, self-guided strolls, summertime concerts, and special events.

Landscape preservation and restoration began in 1984 in the West Garden and continued between 1987 and 1992 in the Terrace, Library, and Rock Gardens. Original plans, historical photographs, correspondence, and invoices were used by garden historians to reconstruct the original gardens and grounds.

Read more about the historic landscape

The Italianate Terrace Garden is the oldest and most formal garden on George Eastman’s estate. It was designed between 1902 and 1904 by Alling DeForest to complement the mansion and its principal rooms. The formal symmetry of the flower beds and the informal arrangement of plantings in each bed reflect Eastman’s need for order and his love of color. The garden today is planted primarily with perennials. There are 23 beds containing more than ninety varieties of plants.

Adjacent to the Richard and Ronay Menschel Library, the Library Garden is a modern adaptation of DeForest's plan for Eastman's cut-flower garden. Built on top of the underground, two-story vault containing the museum's photography, technology, and motion picture archives, it is actually a rooftop garden with a soil depth of barely two feet.

The Rock Garden and Grape Arbor (closed due to construction)

DeForest designed this informal garden rocky landscape, which functioned as a hidden picturesque destination for Eastman’s guests following a stroll through the property. In Eastman’s time, a network of paths and drives connected it to all the other gardens on the estate, as well as to the greenhouses, poultry yard, orchard, and the stable.

Built in 1917, the West Garden was designed by architect Claude Bragdon, who modeled it after an English walled garden designed by Sir Edward Lutyens and Gertrude Jekyll at Hestercombe House in Somerset, England. The garden has been altered many times over the years—first by Eastman in 1921, when he added a Paul Manship sundial. In 1936, the garden was changed again using a plan of Robert Chamberlain, and in 1960, it was redesigned by Nancy Newhall, wife of the museum’s director at the time, Beaumont Newhall. In 1983, the Rochester Garden Club sponsored a partial restoration of the garden and that rendition is what visitors enjoy today. 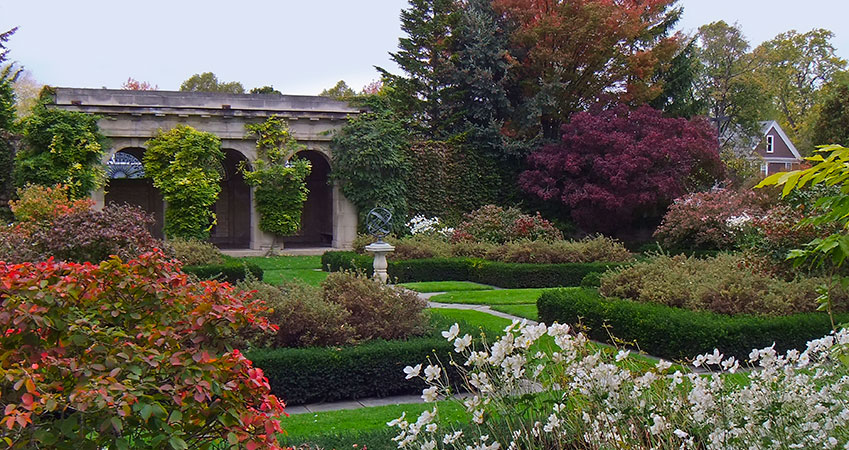 Learn more about the Colonial Revival mansion, built using classical design but with all the modern conveniences.
Read More

Read More
The beautiful estate of a world-respected innovator and renowned entertainer can be the backdrop for your event.
Read More