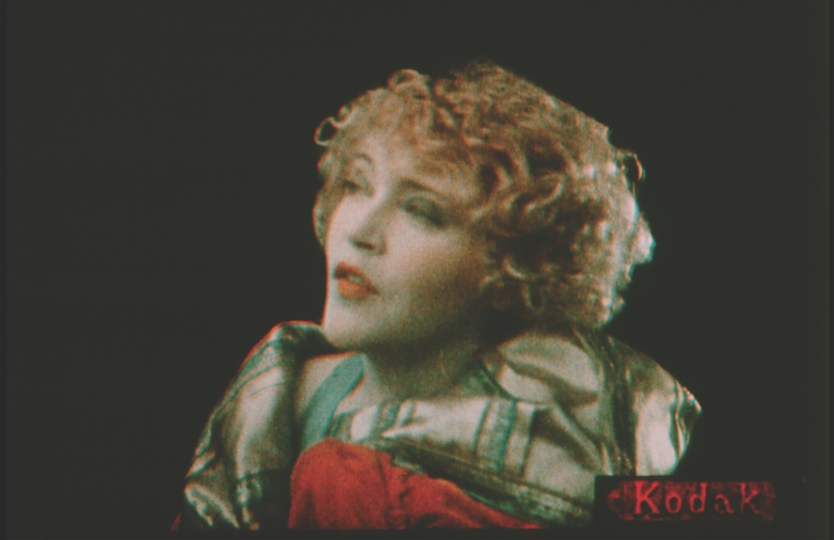 The product name Kodachrome that would be borrowed for the later, more popular film stock was first used for this experimental stock developed in 1913 by a team led by scientist John G. Capstaff. Two-color Kodachrome was a “duplitized” film stock, meaning that dyed emulsion coated both sides of the film base—reddish-orange on one and bluish-green on the opposite—which resulted in a limited, yet striking color palette. Two-color Kodachrome would fail as a commercial product, but the basic idea of achieving color with layered dyed emulsion would eventually be successfully implemented by Technicolor.

Colorful Fashions from Paris displays the technical advancements of this new Kodak color system by highlighting the rich textures of silks and satins, plush velvets, and warm wools and furs. While the color palette is somewhat restricted, the overall effect is natural and lifelike.

Two-Color Kodachrome Test Shots No. III, as film scholar James Layton notes, “appears to be outtakes; its subjects try out different poses throughout and sometimes stop to talk to the people behind the camera.” Seen in this reel are actresses Hope Hampton, Mary Eaton, and Mae Murray, as well as an unidentified woman and child.

[Kaleidoscope] is an unusual abstract film, the result of optical experiments performed by Loyd A. Jones, Head of Kodak Research Laboratories’ Physics Department. Jones combined the principle of the kaleidoscope with Kodachrome, creating what he describes as “dynamic designs of extraordinary beauty and symmetry.”