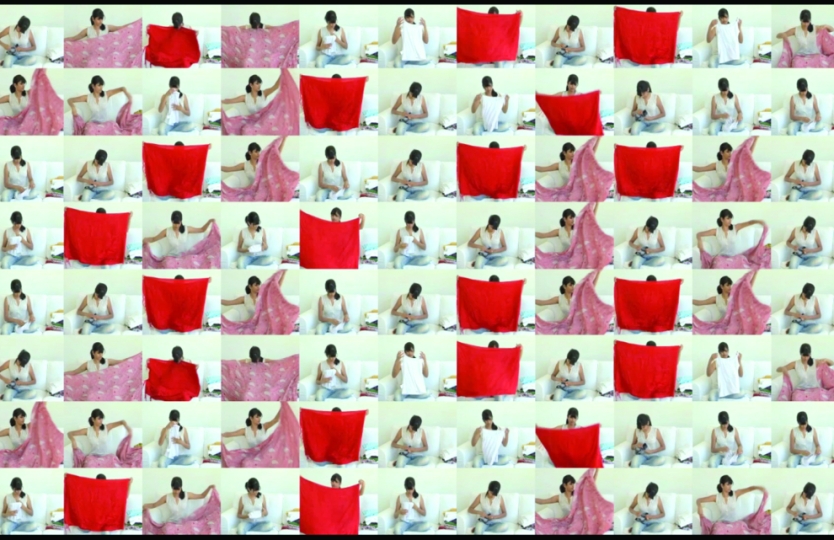 We all do laundry. We all fold laundry. From March 1 through July 1, during museum hours, the Dryden Theatre will present FOLD, a mesmerizing work by new-media/performance artist and composer Surabhi Saraf. Like all of her work, it is rooted in her training in Indian classical music and dance.

FOLD is a projection divided into a grid of 96 frames. In the beginning, the moving image in each of the frames is identical: a dark-haired young woman—the artist herself—sits folding laundry. The multiplication of the image echoes the repetition of her movements—fluid, simple, homey—and is a witty reference to the seeming endlessness of domestic chores. Her gentle, meditative, and haunting humming is punctuated by the snap of a sheet shaken or the hiss of a crease smoothed.

A viewer can engage with the work in many ways, as the visual experience transcends the subject. The moving images in the 96 cells create a stunning, dynamic geometry on the screen. If one tries to follow the action within a single cell, one’s eyes are drawn to other cells, which recall or anticipate it. Although the narrative is simple, there is so much on the screen to follow that one may be tempted to watch the work again and again—each viewing will be entirely different. The folding of laundry has been made hypnotic.

Born in Indore, India in 1983, Surabhi Saraf earned a BFA in painting from MSU Baroda (India) and an MFA in Art and Technology from the School of the Art Institute of Chicago. Her works have been screened and performed in galleries and video art festivals in India, Spain, the Netherlands, South Korea, Israel, Greece, Australia, Italy, Turkey, and the United States. Live performances in San Francisco include FOLD {Live} (2011), Oscillations//Live at the Yerba Buena Center for the Arts (2012), and Grains at the Asian Art Museum (2013). Her first solo exhibition, at Hosfelt Gallery in 2014, premiered the first two works in a three-part series inspired by her family’s pharmaceutical factory in India. She is a recipient of the 2015 Eureka Fellowship Award.

The Dryden Theatre is the premier exhibition venue for the art of moving images as championed and interpreted by the George Eastman Museum. In addition to screening motion pictures during the evening, the Dryden presents contemporary moving image artworks during museum hours. The works are played on a loop, and the selection changes every few months.