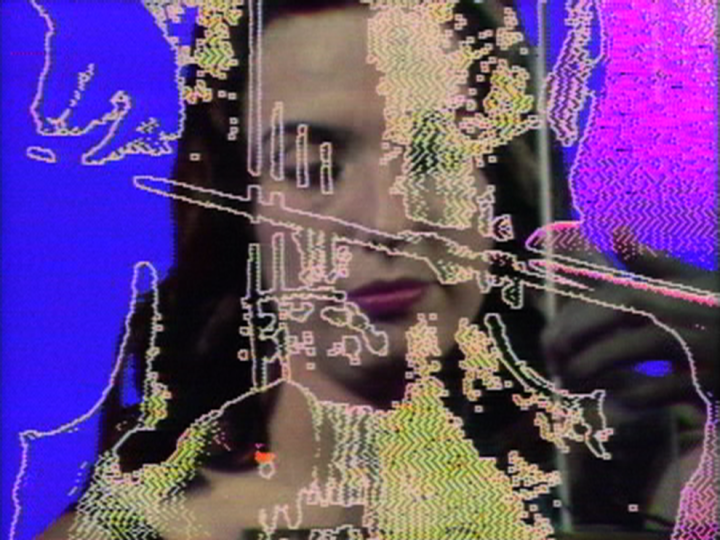 Widely acknowledged as the father of video art, Nam June Paik (Korean, 1932–2006) was a classically trained pianist who embraced modern and conceptual art while studying in Germany in the 1950s. Initially working in music composition and performance, Paik started making video art and using television sets as sculptural objects in the early 1960s. The breadth of Paik’s art, interests, and influences from the time period are collected in Global Groove (1973), a highly influential work of early video art.

Made for broadcast on public television as a “glimpse of the video landscape of tomorrow” (as an announcer at the beginning of the video states), Global Groove takes viewers on a stream-of-consciousness cultural journey around the world through the video medium. Unpredictable juxtapositions abound, from traditional Korean dancers merging with American rock and roll to a Japanese Pepsi commercial flowing into a heavily processed image of a Diné (Navajo) singer. Major twentieth-century artists like John Cage and Allen Ginsberg make appearances along with Charlotte Moorman, Paik’s frequent collaborator who plays their TV Cello invention and even performs with Paik himself in the role of a human cello. With this dazzling explosion of imagery and sound from variable sources flowing together, Global Groove can be considered an early example of a video mash-up.

Paik’s co-director, John Godfrey, was a television engineer at WNET, New York City’s flagship public television station where Global Groove was produced. Godfrey was instrumental in realizing the technical demands of Paik’s vision. In addition to Godfrey’s contributions, many of the striking visual effects on display were made with a device called the Paik-Abe Video Synthesizer, an analog video effects processor that Paik designed with Shuya Abe in 1969.

Global Groove stands today as a prescient work. It anticipated many things that have come to pass since its creation in 1973, with respect to our current global connectivity through media as an “electronic superhighway” (a term attributed to having originated with Paik in 1974).