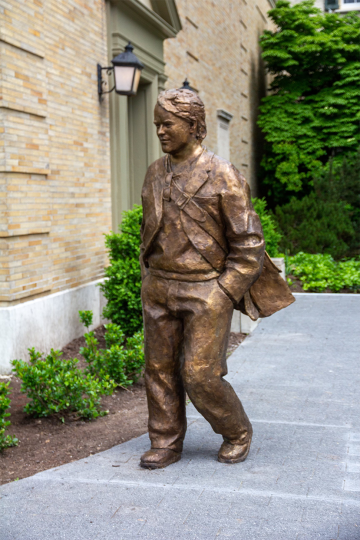 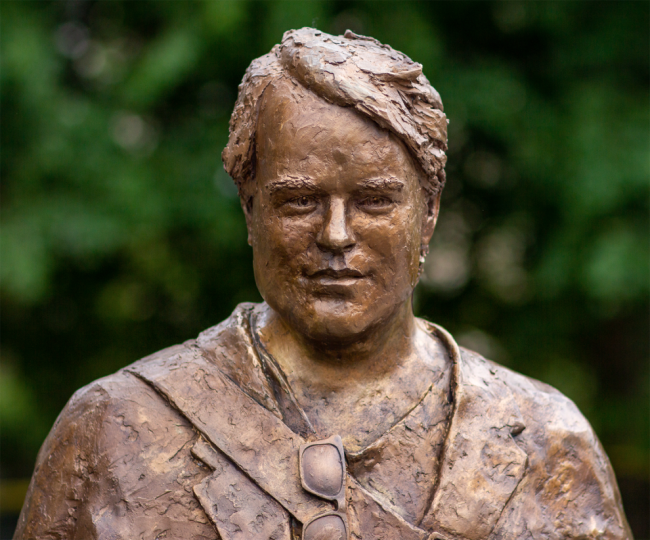 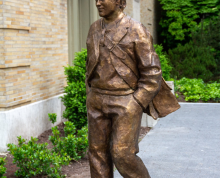 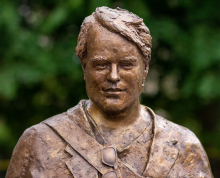 A bronze sculpture of actor Philip Seymour Hoffman is installed outside the Dryden Theatre at the George Eastman Museum. It was created by David A. Annand, an award-winning Scottish sculptor and a member of the Royal Society of Sculptors, and commissioned by Irish-born philanthropist and film producer James Declan Tobin of Boston.

The legacy of Philip Seymour Hoffman is a point of pride for those in his hometown of Rochester. The bronze life-size sculpture, unveiled on May 28, 2022, depicts the actor as though he is walking toward the theater.

Hoffman’s mother, retired judge Marilyn O’Connor, has called the sculpture “a loving memorial” to her son who passed away in 2014 at the age of 46. Hoffman was an Oscar-winning actor who was also nominated for Tony and Emmy awards. He was revered by critics and fans as one of the greatest actors of his generation.

The sculpture will remain on the museum grounds until the fall. New York City is the anticipated permanent location for the sculpture, but the family decided to first exhibit it in Hoffman’s hometown. O’Connor chose the Eastman Museum, the same location she chose for Hoffman’s local memorial service in 2014.

Museum admission is not required to visit the sculpture, as it is outdoors and accessible from the museum’s parking lot.

The tribute to Hoffman was commissioned by Irish-born philanthropist and film producer James Declan Tobin of Boston, whom O’Connor befriended at the Sundance Film Festival in 2015. Upon seeing a sculpture in Ireland of blues guitarist Rory Gallagher, Tobin knew he had found the artistic form for a tribute, as well as the artist. He commissioned a sculpture of Hoffman with the same artist, David A. Annand. Annand worked from more than 500 photographs to capture the likeness. The sculpture depicts Hoffman in casual attire on his way to work with a messenger bag across his chest. The funding for the commission was provided by the Sumner Roy Kates Charitable Trust, which Tobin oversees as president and which was created by his father.

Philip Seymour Hoffman (1967–2014) began his career as an actor when in his teens. He stepped on stage at Fairport High School to play the part of Radar in Mash, directed by Midge Marshall. His first professional work was the lead in Breeze From the Gulf, a family drama directed by Barbara Biddy, at Shipping Dock Theatre in Rochester. In 1984, when he was a senior in high school, he took on the role of Willy Loman in Death of a Salesman.

After graduating from New York University’s Tisch School of the Arts, Hoffman was cast in small supporting roles in a couple of high-profile movies, Scent of a Woman (1992) and Twister (1996). When Peter Sellers mounted a modern-day Merchant of Venice—that traveled from Chicago to London, Berlin, and Paris—Hoffman had the opportunity to be where he loved: acting on stage. In New York City, he joined the company of LABrynth Theater, where he found a home, a theatre family, and opportunity to explore and expand his craft. It was there he took the opportunity to direct the first plays written by Pulitzer Prize–winning playwright Stephen Adly Guirgis. His friendship and collaboration with Paul Thomas Anderson resulted in five critically acclaimed movies, including Boogie Nights (1997) and The Master (2012). Hoffman’s film directorial debut was Jack Goes Boating (2010), for which he was also actor and producer.

In all, Hoffman acted in 56 movies. For his portrayal of author Truman Capote in Capote (2005), he won 26 awards, including the Academy Award for Best Actor. He received three Oscar nominations as Best Supporting Actor for his performances in Charlie Wilson’s War (2007), Doubt (2008), and The Master (2012). Throughout his career, he starred in ten and directed nineteen stage productions.

A couple of family favorites and lesser-known roles are two animation parts. He created the voice for Max in the claymation movie Mary and Max (2009) and played William Fillmore Toffman on a 2009 episode of the Emmy-winning series Arthur. Hoffman also narrated the documentary about the Eastman Theatre following its expansion and renovation.