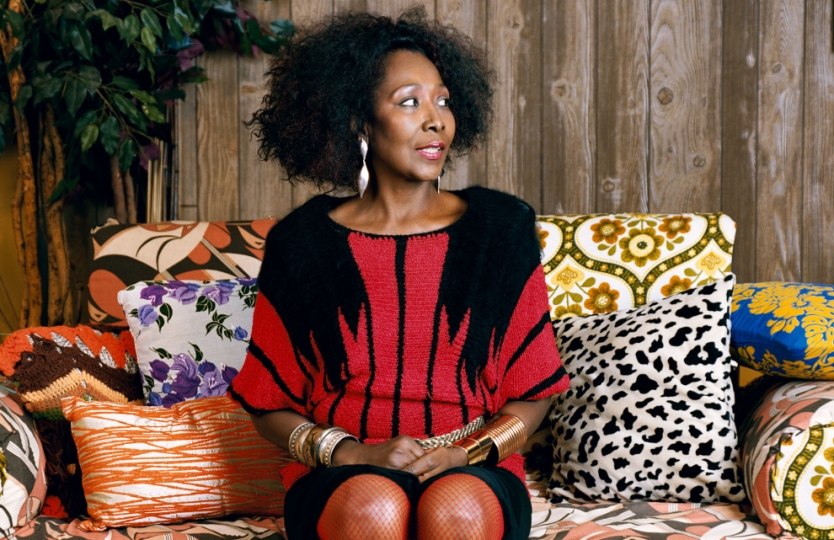 Mickalene Thomas: Happy Birthday to a Beautiful Woman demonstrates the artist’s ongoing engagement with portraiture as a key to personal and cultural identity.

A major feature of the exhibition is the filmHappy Birthday to a Beautiful Woman, a documentary portrait of the artist’s mother, who has served as her muse for the past decade. Interspersed with excerpts from a conversation between the artist and her mother—former fashion model Sandra Bush—are archival film clips, snapshots, and scenes of her mother in her hospital bed as she suffers the effects of the kidney disease that took her life shortly after the film was completed. The film will be presented within a room-sized installation designed by the artist to evoke a 1970s living room, complete with period furnishings and wall coverings.

In the film, Bush, or “Mama Bush” as she refers to herself, discusses her childhood in Camden, New Jersey, in the 1950s and 60s; her struggles with domestic violence and drug abuse; and her career as a model during the 1970s “Black Is Beautiful” era. As she confronts the physical effects of aging and illness, her determination to maintain her characteristic poise and confidence is palpable, prompting reflection on the role of appearance in contemporary society. At the same time, the mother-daughter bond and its significance for each woman’s sense of self is shown to be rich ground for Thomas’s creativity. The result is a poignant work that feels both personal and universal.

The exhibition also includes a group of the artist’s large-scale photographic portraits of her mother. Combining a compositional approach deeply informed by nineteenth century French painting with a keen eye for telling gestures and expressions, the images deftly capture the subject’s personal flair and dramatic presence. Trained as a painter, Thomas employs photography as a vital part of her creative process. These photographs demonstrate her facility with the medium, and the vital role it plays in the work of one of today’s most celebrated contemporary artists.

This exhibition is sponsored by Deborah Ronnen & Sherman F. Levey and the Robert Mapplethorpe Foundation, with additional support from G. E. Vates & Jen Townsend and the Rochester Area Community Foundation.