Calling all sleuths! This is your chance to do some cinematic archaeology and see if you can identify some of our forgotten and untitled film fragments. Take a close look at these films and let us know if you find any clues. Submit your research to [email protected].

Not every film comes into the archive in pristine condition—this is especially true of nitrate prints. What’s in the can may not be what is on the label (if, indeed, there is a label). Credits and titles may be missing, reels may be in the wrong order, and bits and pieces from different films may have been spliced together. We use every available tool at our disposal to identify these mystery films. Examining the perforation area of a print is one of the first steps of film identification: edge codes often help to determine the year when the print was made and, sometimes, the company, and even the shape of the perforations may become an important clue.

Recognizing a particular actor may help, as we can then search their known filmography. Early films (ca. 1900–1915) may exhibit certain characteristics in style, camerawork, costumes, and sets that help identify the production company. Films shot on location sometimes point to an identifiable city and year when we closely examine the architecture, automobiles, or (if we are lucky) street signs. To avoid theft of their property, companies embedded their logos on the walls of sets: AB (American Biograph), the Pathé Rooster, and other signs that could not be erased or covered up today serve as clues to the origin of nameless films.

Since the film industry was growing in countries all over the world, prints circulated everywhere, and sometimes ended up being retitled and given new intertitles to suit a given audience. American films return to us with Italian, French, Spanish, Dutch, Russian, Czech, Polish, and German titles, and sometimes in abbreviated forms missing footage and, therefore, plot. Every major film archive has unidentified films—hundreds of them, sometimes thousands. The easy cases are often solved in an hour, some of the difficult ones linger for decades.

The brackets around the titles indicate that the titles have been applied by staff based on the images in the films. Let us know if you can help us solve these mysteries. Submit your findings to [email protected]. 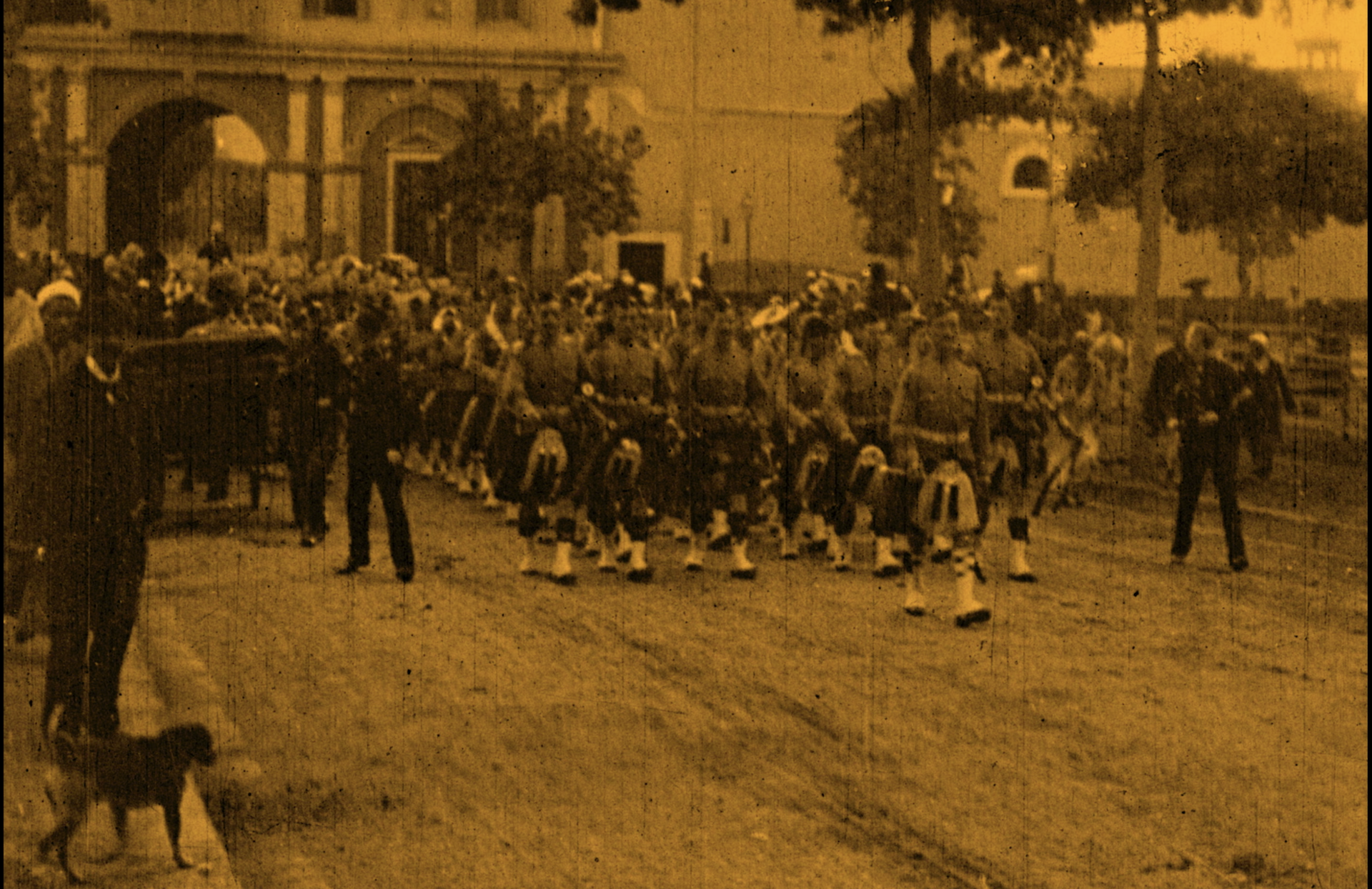 [Unidentified: Two Men in a Punt] and The Seaforth Highlanders’ Return to Cairo after the Fall of Omdurman and Khartoum (UK 1898)

Our request for help in finding the original titles for these two previously unidentified films proved to be successful. Philip Lawes identified the Scottish bagpipe troop as The Seaforth Highlanders’ Return to Cairo after the Fall of Omdurman and Khartoum (UK 1898). The British Film Institute, which holds the complete film, notes: “Possibly filmed by John ‘Mad Jack’ Benett-Stanford on behalf of the Warwick Trading Company, it is a forerunner of the military films that would shortly flood the screens of Great Britain with the outbreak of the Boer War.” Lawes also identified the brief three frames of the men in the boat as probable students at Oxford or Cambridge out on the river in a punt.

A bit more work is needed here to complete the identification. 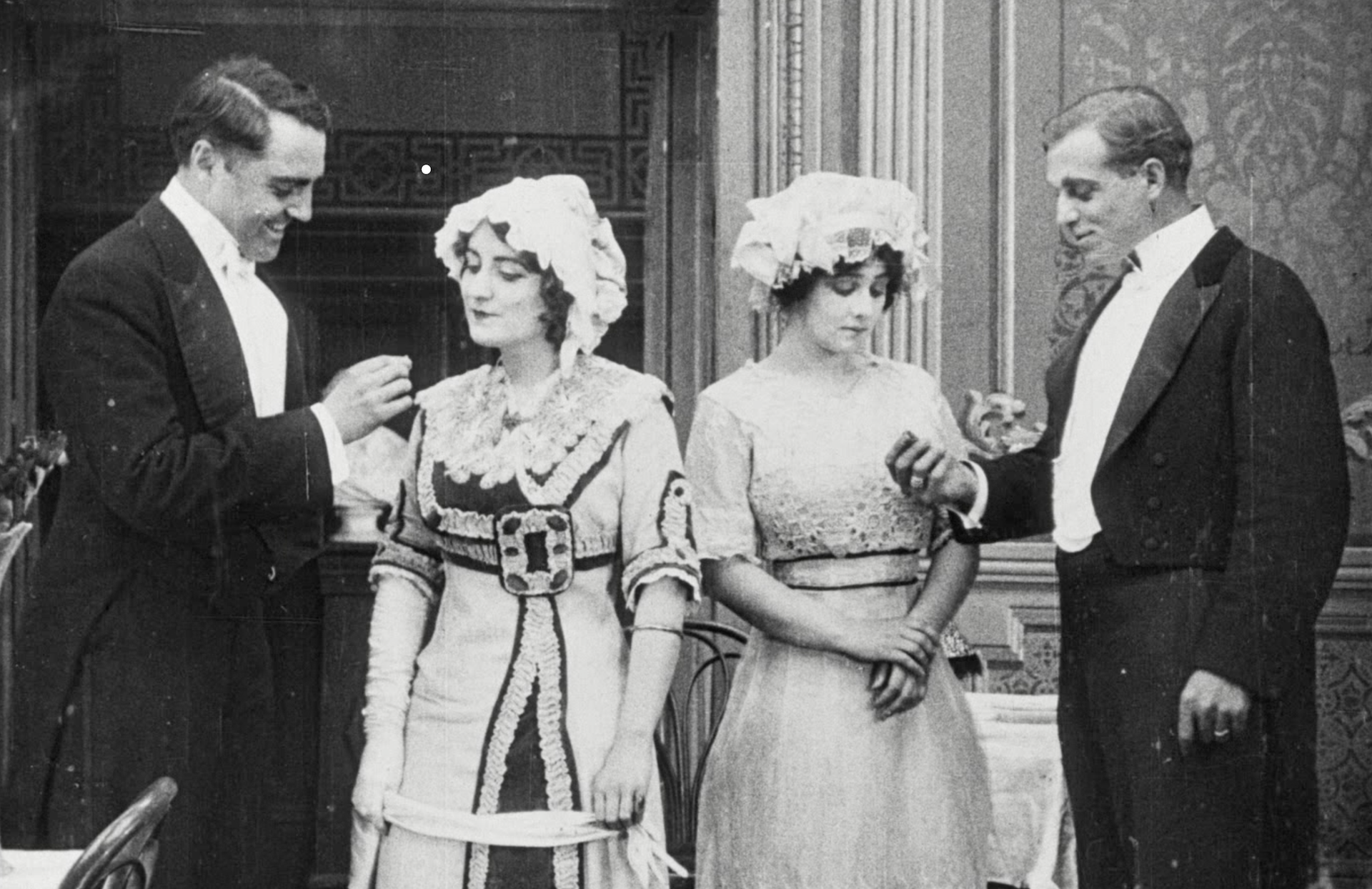 The [Two Bachelors Get Engaged] have been identified by Lawes as When Heart Wires Cross (Powers Picture Company, US 1911). We believe that even without titles and intertitles, it matches the description of the film and two actors, Richard Travers and Fritzi Brunette, are both identifiable. An added bonus is Robert Hansen’s contribution that places the film firmly in New York City on the Upper West Side of Manhattan at 80th Street and Broadway. When Heart Wires Cross is not listed in the FIAF Database of silent films, so it may be that the Eastman Museum’s print is the only one extant.

Thanks to both of these dedicated sleuths for their diligent digging! Their discoveries have been added to the filmographic information for each film.